Tom is 8, cheeky and out of control. Mum's inherited coping mechanisms don’t work and for a boy who “isn’t bad enough to be diagnosed”, there isn’t any support. Change is unmanageable in a crisis so now it’s survival. For Sarah, there must be light at the end of the tunnel, at any cost. Parenting is hard, there’s no rule book, no one is perfect, she gave birth to him so she knows best and he knows she loves him, she told him so.

A darkly satirical, beautiful, raw, human story of one mother's fight to break the cycle of inherited behaviour and save her son. Based on true life events, That Boy will challenge the audience to question what is acceptable in today's changing world.

Written and performed by Martha Lott.

That Boy is brought to you by Martha Lott and Holden Street Theatres with the support of the Restart Investment to Sustain and Expand (RISE) Fund – an Australian Government initiative and funding through the Department of Premier and Cabinet - Arts South Australia. 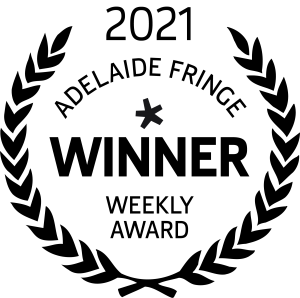 Adelaide Fringe 2021 Reviews for 'That Boy'

★★★★★ "This piece is raw but heartbreakingly human." - Glam Adelaide

★★★★★ - "That Boy is an important piece of theatre and a statement about we, society, treat people who are ‘different’ and is essential viewing for any parent, educator and anyone who works with children." - On The House

★★★★1/2 - "The success of this monologue is in its humanity – an imperfect but unending love from a mother to her son.." - Stage Whispers

★★★★1/2 "Martha Lott’s ability to connect with the audience and hold it in the palm of her hand during the course of a 60-minute monologue is remarkable... Highly recommended." - All About Entertainment

★★★★ - "Lott’s excellent performance – as Sarah steadily coaches herself to be positive, constant and hopeful – is startling in its directness and quiet despair. " - InDaily

"Martha Lott has already proved herself as being the master of monologue. Once again, in That Boy, she shows that she can hold the audience in the palm of her hand." - 5MBS

9 - "This is a very worthy play to see and should be mandatory for all boffins in charge of childcare and education." - The Adelaide Show

Martha started acting when she was eight years old. She studied at Drama Centre London and returned to Australia where she worked in Sydney and Adelaide. She founded and runs Holden Street Theatres. She is an award winning Director, Producer and Actress as well as a published playwright but her heart in still in Acting. Some of her favourite experiences were King Lear, Death of A Salesman, Trojan Women (State Theatre Co SA), Anzac Girls, The Lost Tools of Henry Hole, Changed Forever and the remake of Storm Boy, creating and performing in Shakespeare For Kids over the last four years and her time on air with the ABC Radio. Her producing endeavors have resulted in multiple awards during the Adelaide Fringe and Holden Street Theatres being recognised globally. Her performance in Grounded at the 2019 and 2020 Adelaide Fringe won a weekly Adelaide Critics' Circle Award, the Graham F. Smith Peace Foundation Prize, the Sunday Mail Best Female Solo Show and the Advertiser Art Imitates Life Award.

Yasmin Gurreeboo has worked in the performing arts sector for over two decades and is a theatre director and community arts practioner. Yasmin has a first class honours drama degree from the University of Exeter and trained at the Jacques Lecoq International Theatre School, Paris. Yasmin is the Artistic Director of Foul Play Theatre, Artistic Director for ActNow Theatre and Executive Director for RUMPUS Theatre. Yasmin is currently the Co-Supervising Director and Co-Casting Director for the Decameron 2.0 project, a co-production between ActNow Theatre and State Theatre Company of South Australia. Yasmin was the Artistic Director of the West Wing Arts Centre in Slough; Artistic Programme Manager at Harrow Arts Centre, and Producing Associate at the Barbican Centre in London.

For Foul Play Theatre, Yasmin directed the world premiere of Julie by Holly Brindley, the South Australian premiere of Eurydice by Sarah Ruhl and a reworking of Shakespeare’s Macbeth. Yasmin is currently developing the Persephone Project by Emily Steel for the company and a new work by Holly Brindley. Yasmin’s other directing highlights include Greek (UK Tour), An Ode To My Sisters (UK Tour) and award nominated And No More Shall We Part (Bakehouse Theatre, SA).

For ActNow Theatre Company, Yasmin manages the cultural diversity portfolio, facilitates Responding to Racism performances and leads the Theatre of the Global Majority series of workshops for emerging artists from non-white CALD background. Yasmin has also devised a new show for the company, Like Me, Like You that looks at racism for young audiences. Like Me, Like You premiered at the DreamBig Children’s Festival in 2019. Yasmin has also developed a new show looking exploring the impact of Islamophobia entitled Jumu’ah (Friday Prayers), which will premiere at the DreamBig Children’s Festival in 2021.

Yasmin is committed to championing female identifying voices and diversity on our stages.

Yasmin and Martha met on Decameron 2.0 and share the challenges of working and juggling single motherhood. Her knowledge of the world stage and experience in the needs of small scale regional touring in the UK brings a wealth of knowledge to this project.

Nescha graduated from the Flinders University Drama Centre in 2010. She is a Co-Executive Director of RUMPUS and one half of theatre company Tiny Bricks. For STCSA, Nescha has directed Jasper Jones, Terrestrial, Switzerland, Straight White Men (co-pro with La Boite), Gorgon, Volpone, Krapp’s Last Tape in the ‘Beckett Triptych’ (2015 Adelaide Festival, 2016 MOFO), Othello, Jesikah and Random. Other directing credits include As One (Tiny Bricks), Yerma (Foul Play), Sepia (RiAus/Emily Steel) and Deluge (Tiny Bricks in association with Brink for 2016 Adelaide Festival).

Jordan completed his Diploma of Live Production and Technical Services in 2017. Since then he has worked on a wide variety of shows ranging from music festivals to touring with bands, to opera and theatre. Jordan has done the lighting design for Co-Opera’s past two operas and oversaw the successful country wide tours that followed. In 2020 Jordan relit Martha Lott’s award-winning Adelaide Fringe show Grounded by George Brant. He is looking forward to continuing this working relationship with Martha through the creative process of That Boy as he develops his skills as a lighting designer.

Sascha is an Adelaide based sound artist whose style of music generally involves mashing electronic beats, glitched acoustic instruments and textured ambiences. Sascha is a fully qualified sound engineer, studying at the School of Audio Engineering (SAE) in Adelaide where he received a Diploma of Music Industry and developed a love for recording and mixing bands and musicians. Works featuring his sound design have received various awards and nominations, including several Australian Dance Awards, South Australian Small Screen Awards and a nomination in the 2018 Performing Arts WA Awards for his composition for Love/Less by Kynan Hughes.

Meg Wilson is a South Australian-based interdisciplinary artist and designer who works predominantly with large-scale and often site-specific installation and performance. Meg has recently designed set and costume with State Theatre Company of South Australia (Terrestrial 2018, Euphoria, 2021) and Windmill Theatre Co. (Amphibian, 2018/2021). She works extensively with Vitalstatistix, Patch Theatre (Lighthouse, AF 2020) and Restless Dance Theatre, for whom she designed the 2018 Adelaide Festival production of Intimate Space. She has been largely involved with the establishment of RUMPUS for whom she was venue designer.

Brad has worked on many events over the past 10 years. He started off as a stage manager before branching out to lighting and video. In theatre he has worked on shows with True North Youth Theatre, Slingsby, Foul Play and No Strings Attached theatre of Disability. With No Strings he was given the opportunity to tour to Singapore with I Forgot to Remember to Forget and again to Korea with the same show. With Slingsby he toured with Emil and the Detectives to China and India. In 2019 he was also given the opportunity to light the one and only KISS on a boat off the coast of Pt Lincoln and if that does sound far-fetched enough, the audience was primarily Sharks.

Nicholas is a graphic designer, consultant, 3D artist and illustrator based in Adelaide, South Australia. Following a decade working in the South Australian performing arts in a slew of capacities, he returned to school to study graphic design in 2010. Graduating in 2013, he worked as a studio designer for eighteen months and in 2015 founded his own business, where he now provides branding, cover art, publication design, and general print and digital services to big and small business, government sectors, bands, publishers, film studios and theatre companies. In 2016, he created cover art for Don Handfield and Jeremy Renner’s new comic series ‘The Rift’, which was later adapted by Steven Spielberg as part of iTV’s ‘Amazing Stories’, and has since collaborated with Handfield on three other comic series. He holds a Bachelor of Visual Communication from the University of South Australia and a Bachelor of Commerce from the University of Adelaide.

Nicholas designed the Grounded Poster and Holden Street 2020 Fringe Guide cover. He has worked with Holden Street for many years and has a great knowledge of the balance required in making the marketing appealing and yet truthful. As a new father he is also requires flexible time frames to support his family and his work life balance.

Initially trained as a Librarian Françoise has been working in theatre and event production since 1995. She has worked as a Stage Manager, Production Manager and Project Coordinator for many Adelaide arts companies including the Adelaide Festival, Brink Productions, Restless Dance Theatre, Australian Dance Theatre, Adelaide Festival of Ideas, State Theatre Company of South Australia, Vitalstatistix and Theatre Republic. She has toured nationally and internationally.

In her professional and personal life Françoise aims to increase awareness of environmental sustainability issues. She dreams of an arts world where sustainable actions support the creation of new and exciting works and events. You can find her on Facebook at The French Brace.

★★★★★ - "Martha Lott’s powerful performance as the unnamed pilot is intense, taking the audience high into the heavens and then allowing them to see her heartbreaking fall" - Adelaide Theatre Guide

★★★★"Martha Lott’s portrayal of a jet fighter pilot who’s reassigned after an unplanned pregnancy is astounding. At no point during the performance did I remember that I was in a theatre and the person standing on stage was an actor." - Everything Theatre

"Yasmin Gurreeboo's direction should be praised for her casting and her collaboration with the actors. Her treatment gives the work depth; highlights the complexities of Pam's decision to end her life; and yet challenges the audience's preconceptions about love, marriage and beliefs at every turn. This is simply an excellent production and the Director earns emotional responses because of the deft manner in which she's directed her players...And No More Shall We Part is a truly great tear-jerking play, with perfect casting, battered-dignity and a definite must-see." - Australian Stage

"I would like to thank director Yasmin Gurreeboo (along with her assistant Graham Self) for crystallising her passionate vision as director to the stage. At the end of the journey I was emotionally devastated." - Theatre Vibe

Director, Yasmin Gurreeboo, only arrived in Adelaide a few months ago from Britain and has already made her mark with this production…This is an exceptional piece of theatre and, with only a week to run, should definitely be at the top of your “must see” list for June. – Broadway World

"You should be dying to see this show. Bravo! Bravo!" - Barefoot Review

Please be advised this show includes references to Suicide/Self-Harm.