A middle-aged woman who wanted to be an astronaut as a little girl is on a mission to turn her dream into reality – and she’s on course to achieve it.

After fantasizing about space travel since she was eight, Irish woman Niamh Shaw decided – aged 45 - to spend the whole of 2014 trying to get into space, by interviewing astronauts, astrophysicists, space industry experts and potential colonists of Mars.

On To Space, Shaw said “It’s a show about impossible dreams – what do you do with your childhood dreams when you get to a certain age? I’m in my 40s - do you let them go? And how do you even do that?

“It also gives a good background to space itself, so audiences leave with a nice appreciation of space and interesting facts about it.”

"What begins as a show about space slowly shifts to become something far more profound and personal about dashed hopes and disillusion – and the crucial importance of retaining a sense of wonder" - David Kettle, The List.

Niamh Shaw has had a diverse career so far. A professional scientist, she is also a well-known actress on Irish TV, a comedy improviser, and Artist in Residence at Blackrock Castle Observatory in Cork. But even though she has a master’s degree in engineering and a PhD in science, neither of these was enough for her to get into space.

Despite that, she’s making positive advances towards her dream. Last summer, she went to Ohio for two months to take part in an intensive Space Studies programme run by NASA and the European Space Agency.

“My relations with the European Space Agency (ESA) are continuing to get stronger all the time as well, so I’m very confident that I’m going to do it in the next 10 years,” she said and told us about a new piece that she is making with them about the their current corps of Astronauts. ‘I’m getting the chance to meet the complete corps of 15 ESA astronauts, spending time with them to see if I can find out if they all possess the same qualities, and whether I can learn those same qualities to increase my chances of getting to space’. 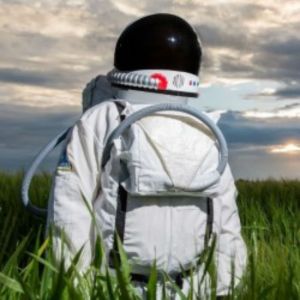