NIKOLA AND HIS TRAVELING LUX CONCORDIA by David Geddes

Presented by David Geddes and the Holden Street Theatres 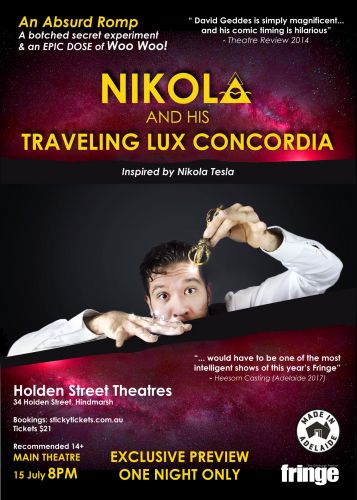 As partners in the Made In Adelaide Holden Street has offered to support Adelaide shows touring to the 2017 Edinburgh Fringe.

NIKOLA and HIS TRAVELING LUX CONCORDIA

Supported by Arts South Australia - Made In Adelaide

Psychedelic trip meets TED talk. Meet Ola the time traveller, warring with his past life, Nikola, a modern scientist, as they fight for the audience’s support for philosophies of science and spirituality. One man, one hour, with a deep dip in a pool of epic woowoo. Using atmospheric music, this show explores subjects on the fringes of modern science with an open mind and a great sense of humour. The experience that may leave you asking what is reality, and what is spirituality?

Ever thought about the entanglement Phenomenon?, the exchange of energy?, A holographic universe?, the Philadelphia Experiment?, Conspiracy theories?

Ever heard of Nikola Tesla? Thanks to him we have electricity in our homes.

Come and support a young South Australian artist on his journey onto the international stage.

This is an Exclusive Preview showing for audiences to catch the new version of the show before we scoot off to Edinburgh AND as a BONUS your ticket gets you a complementary GIFT BAG at the door!

Nikola & his Traveling Lux Concordia engenders a curiosity into what makes us real and how we all are connected. Are we just human or are we literally 'expressions of the universe'?

A RIDICULOUS existential and heart felt laugh Inspired by Nikola Tesla and his interest in the connections between science and spirituality. See our multi-dimensional time traveler 'Ola' absurdly cavort through hyperspace bringing "timeless" tales of his past, present and future including a secret government experiment gone haywire and whole a bunch of epic woo woo.

TICKETS AVAILABLE ON THE DOOR and through his fundraising page

TICKETS FOR FUNDRAISER NLY AVAILABLE AT THE DOOR ON THE NIGHT

Or through David's Fundraising page

Spread the word across the world and support local theatre travel.

Group: Gedi Productions in association with Made in Adelaide (Australia)