A Presidential election is pending.

The USA is at war with Brazil when there is a catastrophic blunder on the battlefield, followed by a bizarre murder in the White House.


How can this madness be spun to the voting public, especially when the President’s wife is a ‘make love not war’ protester?

This darkly satirical political thriller was written around 40 years ago but set 40 years in the future. So right about now. Back then it was fiction. Now, we’re not so sure!

Come along and laugh till it hurts.

“This is one of the funniest plays I’ve ever read”

INDAILY REVIEW - The White House Murder Case
"...it is fast and funny, the characterisations are solid and entertaining.." reviewed by Greg Elliott

5MBS REVIEW - The White House Murder Case
"An exemplary production, in which an excellent group of actors respond to the demands and strengths of a well-written play. Highy recommended."

"we find ourselves laughing about horrendous things."

"...with generally excellent performances from an outstanding ensemble, The White House Murder Case should prove a rewarding experience for all audiences." .

"..very particular brand of comedy, blending the smart and the goofy in a way that we don’t often see."

"..The political spin gets progressively further and further from the truth into the realms of fantasy."

Eddy is a highly regarded director with significant academic and production experience. He has a first class honours degree in drama studies from the University of Adelaide, graduated from the Directing Course at the Flinders Uni Drama Centre, and has very recently submitted his PHD thesis in creative writing.

Here are a few highlights from Eddy's directing career:

RICHARD PARKHILL has been fascinated by light since the late 60’s. He has worked with Melbourne Theatre Company and was a Senior Lighting Director with Channel 10 and designed lighting for shows including Young Talent Time, and Prisoner. Richard is currently the House Technician at the Arts Theatre. He regularly designs lighting for several amateur theatre companies including The Adelaide Rep, Red Phoenix, Therry and the Theatre Guild. He has designed several productions this year including The Diary of Anne Frank for The Adelaide Rep; Henry V and The Psychic for the Theatre Guild and Two Brothers for Red Phoenix.

Tim re-established his love of theatre when he moved to Adelaide from Sydney in 2004.

His first production was with The Stirling Players playing Will Mossop in their production of Hobsons Choice, for which he was nominated for an Adelaide Theatre Guide award.

Other Stirling Players productions include - directing Outside Edge for Stirling Players in 2007, and acting in One Flew Over the Cuckoos Nest, Scenes from a Separation, God of Carnage and Our Countrys Good over the last few years as well as Therry’s The Darling Buds of May, playing Pa Larkin (2014) , When the Rain Stops Falling (St Judes Players 2016) and earlier this year playing Otto Frank on the Adelaide Rep’s production of The Diary of Anne Frank. .

Tim is very excited to be working with the excellent Red Phoenix team – and hopes audiences appreciate the subtle accent differences of President Hale.

MATT HOUSTON makes his third foray into Shakespeare with Titus. He has performed in the Theatre Guild's Much Ado About Nothing and The Two Gentlemen of Verona. Recent acting credits include playing a man, a woman and a child in The Umbrella Plays at the Adelaide Fringe, and The Adelaide Rep's The Cripple of Inishmaan as Cripple Billy. For this performance, Matt has been nominated for Best Male Performance - Amateur in the 2016 ATG Curtain Call Awards. Matt helps operate the West Terrace Cemetery's interactive night tours, sells furniture, and teaches at high schools now and then.

JOSHUA COLDWELL has appeared in myriad different roles including the Theatre Guild¹s Richard II, A Midsummer Nights Dream, A View from the Bridge, Macbeth, Richard III and Much Ado About Nothing. For The Stirling Players in The Compleat Female Stage Beauty, Collaborators and The Beaux' Stratagem. For the Adelaide Rep in Star Quality, Dracula, MC for both, Mystery of the Hansom Cab and Only an Orphan Girl; as well as Cat on a Hot Tin Roof. Earlier this year he appeared in Blue Sky's Sense and Sensibility. For Red Phoenix he has performed in Titus Andronicus and most recently in Two Brothers. This summer he will be joining Blue Sky Theatre company once again for an outdoor "The School for Scandal.

WAYNE ANTHONEY has performed as an actor, clown, stand-up comedian and magician all over the world. In the 1980’s he delighted small children as Humbolt the Clown on Fat Cat and Friends. He trained actors at the Adelaide College of the Arts and has written a collection of comedy plays, many of which have been performed around the world. With his clown troupe, Magick Circus, he had ‘em rolling in the aisles all over Australia and in many parts of Europe. Clowning days are over but he regularly performs his magic show in the persona of Professor Orlando, late of Hogwarts College. (Found young Harry Potter somewhat obstreperous.) In clowning days, he toured the outback, performing in many Aboriginal communities, and formed a lasting interest in and concern for Aboriginal people. Wayne appeared as Don in ‘Don Parties On’ for Red Phoenix last year. His most recent film role was as John Clarke’s demented father in ‘A Month Of Sundays’. He was awarded an OAM in 2014 in recognition of his services to the performing arts and to indigenous Australians.

Anita has appeared in seven productions with Galleon, including Let the Sunshine (2017); Cheaters and Sex Cells (2016); Jake’s Women, and Rumours, directed by Kym Clayton and winner of the 2016 ATG Best Comedy Award (2015); Accommodations (2013); and Haywire (2004). Anita’s other acting credits include Last of the Red Hot Lovers (Daw Park Players; Richard II, Marat/Sade, The Malcontent, The London Cuckolds, First Time Out and Romeo and Juliet (University of Adelaide Theatre Guild); Man of the Moment (Therry Dramatic Society); Extremities and Dangerous Liaisons (Burnside Players); and It Could be Anyone of Us (St Jude’s). Anita was nominated for the 2016 ATG Best Female Performance Award for her performance in Rumours. 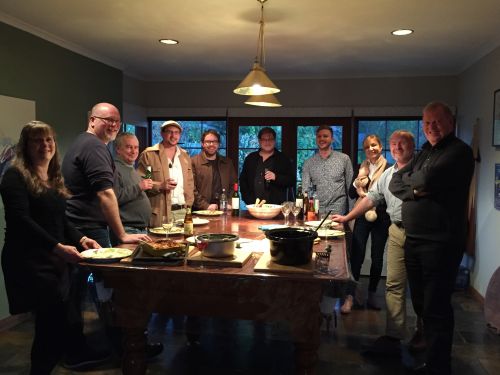 Rehearsals are now well underway for White House Murder Case. The first reading has been and the company are now in the theatre marking out the stage, learning new things about the script and playwright and creating a world that we will soon be invited into. It's one of the most exciting times of the process for the creatives. The discovery of who the characters are, the unveiling of layers of characterisation, the look and feel of the piece and the meaning behind what the playwright wrote. All the while the director is bringing together these unknowns and creating an exciting piece of theatre. Something that is always a challenge is keeping the work fresh. Making the character's discoveries seem new first time every time.

I can't wait to see what happens in this piece. It's not as I first thought it would be...

INDAILY REVIEW - The White House Murder Case
"...it is fast and funny, the characterisations are solid and entertaining.." reviewed by Greg Elliott

5MBS REVIEW - The White House Murder Case
"An exemplary production, in which an excellent group of actors respond to the demands and strengths of a well-written play. Highy recommended."

"we find ourselves laughing about horrendous things."

"...with generally excellent performances from an outstanding ensemble, The White House Murder Case should prove a rewarding experience for all audiences." .

"..very particular brand of comedy, blending the smart and the goofy in a way that we don’t often see."

WARNING: FOG MACHINE (Fazer) USED during the performanse. Note: Antari Fog uses de-ionized or pure water with some glycerine added. The liquid is eco-friendly and safe for human contact.