The Holden Street Theatres' Adelaide Fringe Award has been offered since 2015 to South Australian artists at the Adelaide Fringe. This award seeks to help local artists develop their work by offering free rental at Holden Street throughout the year for a total of four weeks. This can be used for project development or performance, including during the following HST Fringe program.

The 2021 winner is Taylor Nobes for the play Does It Please You? We're so excited to see what they bring us next!

In 2020 Holden Street Theatres awarded two winners, starheART Theatre for their production Dirty People and Millicent Sarre for her show Friendly Feminism for the Mild Mannered. Due to Covid-19 developments and restrictions dates have been pushed back but they will still be able to use their award, keep an eye out for what these emerging talents have on offer.

Waxing Lyrical were the first ever winners of our HST Adelaide Fringe Award in 2015. They used their award to book in theatre space to develop their latest project. 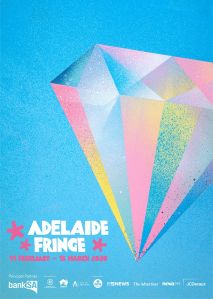 Interested in applying to be a part of our HST 2020 Fringe program?

2020 will be Holden Street's 18th birthday and it will be the 60th anniversary of the Adelaide Fringe. It's safe to say that 2020 will be our biggest year yet!

Find out more information and download an application form here!

Did you know we also offer the Holden Street Theatres' Edinburgh Fringe Award?

We aim to bring the best theatre the world has to offer back to Adelaide every year.

Take a look at our past winners and award criteria!