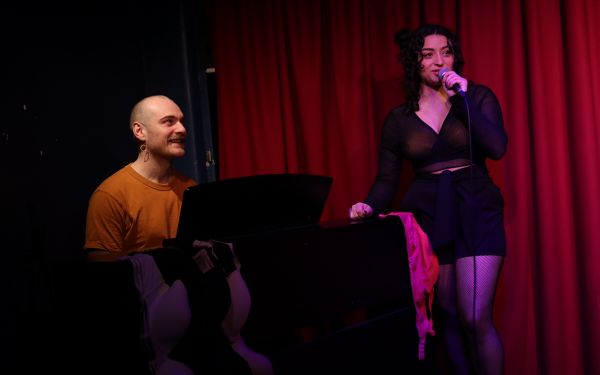 Back-breaking boobs and a young woman who was “blessed” with more
than her fair share.

You know the saying “you can’t have too much of a good thing”? Well, that’s bullshit. For as long as she can remember, Gemma has been identified by two big things... her incredible sense of humour and her massive jugs. Come and see her sing and dance her way (in a very supportive bra) through the pubescent rollercoaster that led to her having breast reduction surgery.

Was it the ungodly weight of the breast tissue, or the weight of societal expectations put on women that made Gemma say, “enough is enough”? Tits, womanhood and hereditary burden, this (now) well-proportioned Maltese titan of comedy and song will guide you through what it means to be cursed by what so many others desire.

A comedy cabaret directed by powerhouse emerging director Sarah Frencham, ’Underwire' is a captivating hour of storytelling that is sincere, sexy and stupid, and isn't afraid to get into the nitty-gritty of having overgrown titties.

After the roaring success of her Melbourne Fringe season in 2022, Gemma is
bringing 'Underwire' to her hometown, a show that took her whole life to grow,
then chop off.

“the definition of “word of mouth must see”... this festival gem earned an all resent standing ovation and is absolutely not to be missed.” - Chuch Moore Reviews About

“she belongs on stage, that’s super obvious... her voice is beautiful... she's a visionary... an exciting, important piece of art.” - Praise Dionysus! Podcast

“Wonderfully funny with excellent comedic timing, Caruana has a face for cabaret”

“Caruana’s script does not have a single dull moment. It is snappy, smart and expertly structured”

“An overall spectacular debut from a new comedy voice, Underwire is not to be missed.” - Theatre Travels

“Presenting to a near-sold out audience on opening night, Gemma Caruana is perhaps one of the funniest, wittiest and talented cabaret performers in Melbourne.”

“A masterclass in cabaret writing and performance.”

“Caruana comes across as a force of nature”

“Her confidence is well-earned: this is a precociously accomplished debut.” -
The Saturday Paper

“I can’t believe this is Gemma’s first solo show! The writing is scalpel sharp, the performance supports it beautifully and we all felt lighter after the procedure. This funny and moving show does much more than you might think a show about boobs can. And it cured my back pain!” - Ash Flanders

“All the confidence, charm and clarity of a seasoned musical theatre performer. A deft and nimble script that knows the right tone to strike at every moment and how to nimbly switch between them. Don’t wait for her next one. It might be a debut, but she’s f*cking good already.” - Anna Piper Scott

Hailing from Tandanya/Adelaide, Gemma is a Queer creative artist of Maltese heritage currently based in Naarm/Melbourne.

Gemma discovered her love for cabaret and self-devised works while completing the Class of Cabaret program through the 2017 Adelaide Cabaret Festival, directed by Ali McGregor and Eddie Perfect. During this time she was under the mentorship of internationally recognised cabaret artists including Amelia Ryan and Michael Griffiths. Her first one-woman Cabaret Underwire debuted at the Melbourne
Fringe Festival in October 2022 to rave reviews.

Gemma is thrilled to be producing Underwire under her production company, Mover’s Call Theatre Company, which she runs with her closest friends and collaborators, Chanda Anderson Prior and Lachlan Seal.

Connor Dariol is an actor, musician and comedian who graduated from Federation University’s Arts Academy in 2020. His debut sketch comedy show The Annual Chumsville South North Tavern Inn Open Mic Night, played at the MICF to sold out audiences and was the first production under his company Smelling Good Productions which he runs in collaboration with his creative partner William Boyd.

Connor was creatively-involved in productions for both the Sydney and Melbourne Fringe Festivals in 2022 under Smelling Good Productions, and made his debut as Musical Director in Underwire during its run in the 2022 Melbourne Fringe.

His most recent acting credits include, Thrive: Queer Voices Out Loud by Cheyney Caddy and The Marvellous Life of Carlo Gatti, which played at Theatre Works in 2022 to rave reviews.

Connor is performing his debut solo show in the 2023 Adelaide Fringe, Long Play, a comedy lecture full of songs, dissecting the history of recorded music, playing at The Warehouse from the 2nd-5th of March.

After completing her Bachelor of Music Theatre at Federation University in 2019, Sarah has gone on to work broadly in Melbourne’s theatre scene, taking part in workshops, script readings, and touring nationally with children’s theatre company Alpha Shows in The Little Mermaid. She has also worked as writer and collaborator on multiple revues and cabarets such as Chaos the Cabaret, Mixed Bag Revue and A Manic Pixie Dream Cabaret. Sarah’s directing credits include The Dam, The Silent War, [Title of Show], Voyagers (assistant director), The Proposal, A Lovely Day to Be Online (associate director/co-dramaturg). Sarah is passionate about the development of Australian voices and new works and has been thrilled to work on Underwire.