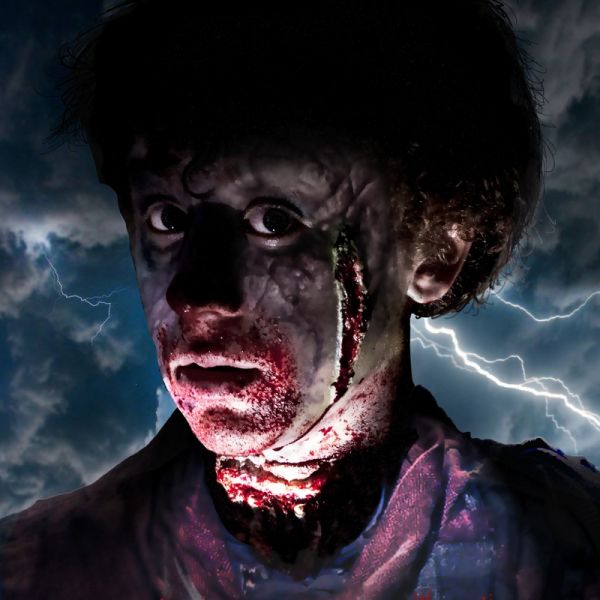 “I get a chainsaw hand – what more could an actor want?” - Finn Caulfield, who plays Macbeth

Macbeth Re-Arisen by David Mence “Macbeth canst ne’er be slain by man nor sword, for he hast now become an Undead Lord.” On a Highland crag, Macbeth re-emerges to take Scotland, this time with a chainsaw hand and a zombie army. Part Shakespeare, part Evil Dead, Macbeth Re-Arisen is the schlock-horror, black-comedy sequel to Macbeth.

On a Highland crag, thanks to some supernatural witchy-magic, Macbeth re-emerges to take Scotland, this time with a chainsaw hand and a zombie army.

Will the Witches’ prophecy come true?

All your favourite characters come back to life, including Lady Macbeth, whilst others meet a grisly end. Full of the big moral questions about power and corruption: who is fit to govern Scotland, was it all Lady Mac’s fault, is Macbeth a tragic hero? Will Fleance flee? Will Banquo rule? And what of Birnam Wood… A moral fable told in iambic pentameter with some truly anachronistic moments. If you like Evil Dead, zombies, and Shakespeare this one’s for you.

From the award-winning team that brought you the sold out #nofilter Adelaide Fringe 2015 and the sold out Everybody Dies Adelaide Fringe 2016. Winners of the ATG Curtain Call Award Best Youth Production 2016. Led by respected award-winning youth theatre maker Claire Glenn, this cast of experienced young performers return for another Fringe season of mayhem and humour. Starring Finn Caulfield as Macbeth, Megan Patterson as Lady Macbeth, Sam McKenna as Malcolm/Fleance, Ismael Hamilton as Macduff, Ethan Miotti as Banquo, and Jenna Bezuidenhout as Hecate.

Our support of thess local artists is made possible through funding received from Arts SA.