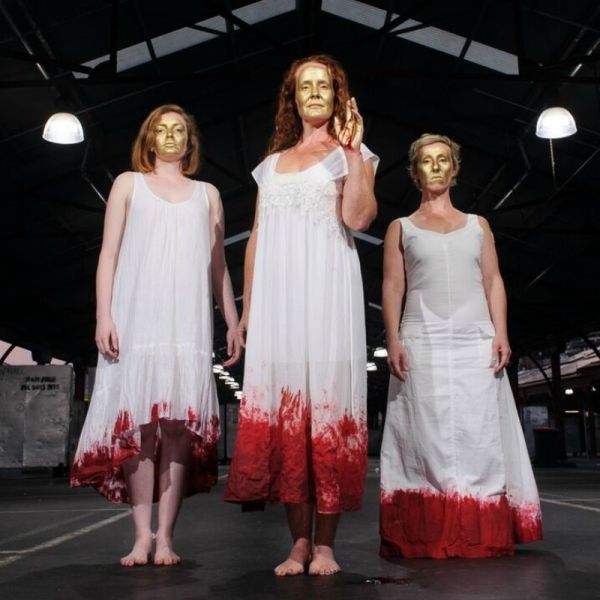 “The tragedy of Julius Caesar as told by William Shakespeare is over 400 years old and yet this production is fresh and still brutal viewing. In a taught 80 minute edit, this production is piercing in its succinctness.” Keith Gow aussuietheatre.com

“Essential Theatre’s female cast achieved what Shakespeare didn’t. I am sure he would have applauded” G McCoubrie Melbourne Observer

"A Fresh Angle....Deliveries were flawless...." - the Advertiser

Fresh from a sell out season in Melbourne, Essential Theatre bring you Shakespeare’s gritty tale of loyalty, ambition & betrayal. In this age of uncertainty one thing is clear, Caesar will die tonight. Fleur Kilpatrick directs a cast of six tenacious women in this raw & breathless 80 minute edit. “fast paced & lusty … it will excite & delight”

Julius Caesar is a gateway into contemporary politics - conspiracy, retribution and tragic idealism.

In a time when political figures are either heroes or traitors, Julius Caesar remains an incredibly relevant exploration of human power and struggle.

Officials break up a gathering of citizens who seek to celebrate Caesar’s triumphant return from war. Accompanied by Antony, her friend & ally, Caesar is stopped on her way to the Arena by a Soothsayer who warns her “beware the ides of March.” (March 15th)

Senators, Cassius & Brutus are suspicious of Caesar’s fondness for the power she holds. Cassius, a confident yet shrewd general, is vocal in her disdain for Caesar, while Brutus, an honourable & noble general, has a more balanced view of the political situation. Cassius & her allies visit Brutus at night & persuade her to join them in their plot to kill Caesar.

On the Ides of March, Caesar is unsure about visiting the Senate due to her wife's dreams & superstitions but is persuaded to go. Upon arriving at the Senate, Caesar is surrounded by a group of conspirators & stabbed to death. Brutus gives the final blow.

Antony is devastated by Caesar’s death & volunteers to die along side her friend. Brutus appeases Antony with honest reasoning & allows her to give the eulogy. Brutus speaks first, calming the crowd, however Antony’s speech stirs their passions & the people turn to rioting, forcing the conspirators to flee from the city.

Brutus & Cassius gather an army & prepare to fight the forces led by Antony, who has now joined forces with caesar’s niece, Octavius.

Away from Rome, Brutus & Cassius are filled with doubts about the future & they quarrel bitterly. They reconcile their grievances, before facing their death. Octavius & Antony win the battle & return to Rome. Caesar’s spirit is mighty yet!

Essential Theatre have built an incredible reputation over the last 15 years of producing innovative accessible Shakespearian performances. They have toured across Australia and New Zealand with their annual tour “Shakespeare in the Vines” and are delighted to be bringing their sell out season of Julius Caesar to the Adelaide Fringe.