Melbourne International Comedy Festival is on the hunt for classroom crack-ups dreaming of taking their comedic talents to the next level and being crowned Australia’s funniest with registrations now open for the 2016 Class Clown Competition. The country’s largest teen competition will hit South Australia as part of the 2016 Adelaide Fringe Festival in March.

Whether it’s taking centre-stage in the schoolyard or cracking up the class on the quiet, for those in years 9-12 or who are 14-18 years old, Class Clowns strives to help young people develop comic writing and performance skills and provides a platform to recognize and expose budding comedy talent.

Fresh-faced funnies can sign up free to workshop five minutes of their own original gags with professional comedians, who’ll help them polish their act before they go on to perform in a show at Holden Street Theatres on Tuesday 1 March competing on stage in front of a live audience.

The winner will go on to battle it out for the title of ‘Australia’s Funniest ‘at the Class Clowns National Grand Final in April 2016 during Melbourne International Comedy Festival. The overall winner for the competition will take home $1,500 for themselves and $1,000 workshop package for their school.

Class Clowns is Melbourne International Comedy Festival's development program for young people around the country. From workshops in schools to a national comedy competition, the bright young things of tomorrow have the opportunity to be on a journey like that of alumni Josh Thomas, Joel Creasey, Tom Ballard, or YouTube sensation Neel Kolhatkar to name a few.

"Class Clowns is about brand new talent and ideas but also about building confidence in young people and watching them experience the pure joy of being on stage" - Anne Edmonds, Comedian 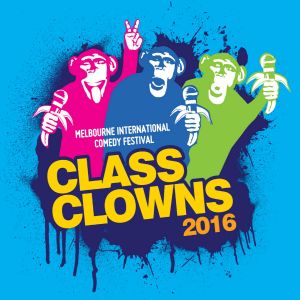