Transition is a new youth theatre show created and performed especially for Fringe 2016 by members of Prospect Theatre for Young People. The play is aimed particularly at kids aged 12 – 15, an age group not often the focus of theatre shows.

A Journey... Childhood to Adulthood…Obstacles along the way, but no instructions, no guidebook…

And for most western cultures, no formal ritual to mark the passing from one stage of life to another.

How does this connect with the current fascination with rites of passage stories in books and films such as The Hunger Games and Insurgent, where young people in uncertain times are called on to prove their courage, resilience and intelligence?

In one – a contemporary group of early teens struggles to deal with the hurdles life is throwing at them.

At the same time, another group of kids of the same age, in an unknown place and time, set out on a journey of initiation to prove their courage and quick wits and find their way home.

In a skilfully crafted piece of theatre, these two stories interweave and interact to take young teens on a journey of danger, laughter and self-discovery.

Prospect Theatre for Young People has been creating thoughtful and imaginative theatre for young audiences in Adelaide over the last five years. 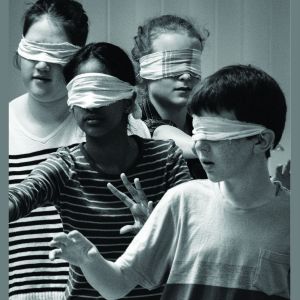