The Element in the Room: A Radioactive Musical Comedy About the Death and Life of Marie Curie

Following smash hit musical comedies about Charles Darwin and Albert Einstein, multi-award-winning Tangram Theatre Company returns for the 2016 Adelaide Fringe to take on the ‘queen of radioactivity' Marie Curie. Promising a treat for nerds and newcomers alike in The Element in the Room: A radioactive Musical Comedy About the Death and Life of Marie Curie.

This adventurous musical-comedy-road-movie follows Curie's real-life journey across the USA to find a single gram of radium to continue her research. Featuring incredible scientific breakthroughs, very silly songs and an audience-participation radioactive decay chain, this is an exuberant celebration of the first woman to win a Nobel Prize, whose work continues to affect our lives today.

★★★★★ “It's clever, heartfelt and it’s made me the most excited I've been about science in years.” - Broadway Baby

★★★★ “Utterly accessible and engaging on multiple levels” - The Times UK

John Hinton is an actor, director, teacher, science communicator, playwright, juggler, theatre practitioner and singer-songwriter, but above all, Hinton is a storyteller. For the past seven years, Hinton has been touring internationally with his solo musical comedies about scientists.

The Element in the Room: A radioactive Musical Comedy About the Death and Life of Marie Curie, completes the company's musical 'Scientrilogy', including Off West End Award-winner ALBERT EINSTEIN: RELATIVITIVELY SPEAKING (2013) and THE ORIGIN OF SPECIES … (2009). Joyfully and irreverently exploring seminal figures in biology, physics and now chemistry, they are peer-reviewed by University of Sussex professors and have toured to over 20,000 delighted audience members in the UK and internationally. 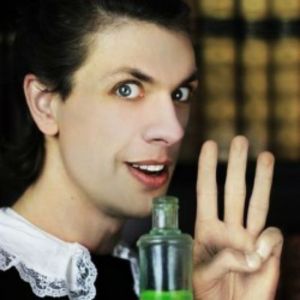