Critically acclaimed and in high demand, Shakespeare for Kids broke completely new ground in children’s theatre when it premiered at the 2013 Adelaide Fringe. Based on Charles and Mary Lamb’s (1775-1834) Tales from Shakespeare, it features two of Shakespeare’s classic plays: A Midsummer Night’s Dream and Romeo & Juliet.

Any preconcieved notions of Shakespeare’s works being too complex for children are cast aside in this entertaining and comical production that has proven to delight children and adults alike. The stories are told with classical theatrical devices and good old stage craft. The traditional language is brought to life by the actors and a narrator leads the story telling, all offering a door to the imagination of the audience.

Based on the plays of William Shakespeare & Charles and Mary Lamb’s Tales from Shakespeare (1775-1834) , these adaptations of Shakespeare's greatest plays introduce classic tales such as A Midsummer Night’s Dream, and Romeo & Juliet to children of ALL ages. Blending the language of old in recycled, gluten free, organic theatre.

These tales were created for the young viewer as an introduction to the study of Shakespeare. The Bard’s words are used as often as possible, and in whatever has been added to achieve the regular form of a connected story, diligent care has been taken to select such words as might least interrupt the effect of the beautiful English tongue in which he wrote. Therefore, words introduced into our language since Shakespeare’s time have been avoided as much as possible.

Our production blends Lamb’s Tales and the language of old into a recycled, gluten free, organic theatre for children of all ages.

The Recycled Theatre Company, a touring children’s theatre company encourages young people to explore the classical texts such as Shakespeare, the Jacobeans through to the Greek Myths and to present these with the ‘stuff in the back shed’. To encourage the formation of ‘backyard theatre companies’ and to rekindle the exploration of language and ideas. To ignite the passion for entrepreneurial behaviour to create solutions to the challenges of presentation and have fun.

"While the original plays were written by William Shakespeare somewhere around the 1600's, Lamb's version of the stories were written by Charles and his older sisyter Mary in 1807... and now they've taken on another contemporary twist via creative performance"– Martha Lott, Director

★★★★★ “The Concept for this show is perfect” – Barefoot Review 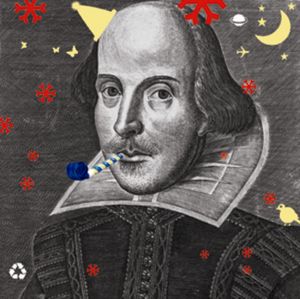