Prince Pipsqueak will break new ground in children’s theatre at the 2016 Adelaide Fringe as it explores gender stereotypes and the pressures of masculinity facing young boys during their development.

The modern fairy tale, created by S.A based collective Gumption Theatre Co. follows an unconventional prince who’d rather catch butterflies than run a kingdom. But when the King and Queen go on holiday, Prince Pipsqueak needs to take charge.

The pressures that Pipsqueak faces to transform into a proper Prince reflect the real struggles that many young boys face to meet society’s standards of masculinity.

From a young age, boys are taught that in order to ‘be a man’ they should not express vulnerability or femininity. Studies show that girls and boys cry approximately the same amount until they reach the age of twelve, at which point this drastically changes. Many boys are also conditioned to believe that they can’t enjoy typically feminine things, such as dancing or the colour pink.

“The conditioning of young boys to dissociate with vulnerability and femininity leads to many problems, particularly mental health issues. Prince Pipsqueak explores this in a way that’s accessible and most importantly fun for kids, as well as parents” 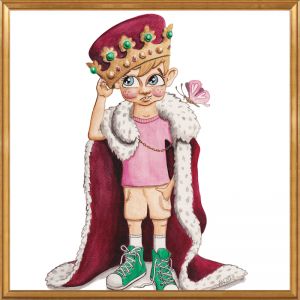